Who Reviews the Reviewers? #1 Redacted Tonight

I was originally thinking of starting a new blog that looked at reviewing reviewers, because there had been such an influx of YouTube vloggers who are film critics and as they were (and still are) of such a contrast in styles and quality I thought I'd give an objective view on how each of the reviewers approaches their own review. Meta-reviewing if you like.

However, I never really got around to that, because I doubted whether all the effort would be worthwhile. So, although I might well write about internet film critics one day, this piece is about a different type of reviewer. 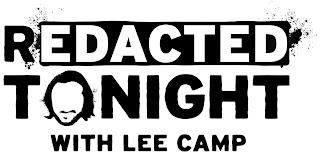 I was introduced to this programme by a friend who likes his independent media. However, unlike various YouTube based media reporting (such as The Young Turks), Redacted Tonight - 'satirical news' hosted by Lee Camp - is funded/owned by Russia Today (RT) the 'news' network backed by the Russian Government.

All the broadcasts are freely available online, via the RT site or on YouTube, which helps give a veneer of independence. Even if the cleverly worded title also makes no attempt to hide their backers.

I'm not saying that Redacted Tonight are making 'fake news' themselves, unlike RT who have faced repeated accusations of propagandist fabrication and airing any criticism of the 'West' whether conspiratorial or manufactured, indeed, Redacted Tonight seems like a softening of approach by RT even if they keep to the script of constantly criticising the 'West' without offering the same critical eye upon Russia (obviously).

Redacted Tonight has the appearance of a John-Stewart-esque comedy news show, and is hosted by the diligently sincere activist/comedian Lee Camp. It is strident in its criticism of the main stream media "liars", the US government, politics in general "corrupt", big business, and so on.

I don't deny Lee Camp's genuineness, as he has been a writer, satirist, and vlogger for many years before Redacted Tonight aired. I don't doubt that he has always been a critic of the US government, the over-involvement of corporations in civic life and so on. However, it's a bit galling that he's now doing so on behalf of a government that is more authoritarian, dictatorial, and exploitative than his own. Still, it's a sacrifice to get one's voice heard I suppose you could argue.

Indeed, one could suggest that the British government's involvement with the BBC is similar and there isn't any great example of Russian government interference with Lee Camp's script or the programme as a whole. The problem here is not having enough information to offer a clear criticism, because if there's no example of specific interference then we can't claim that any has taken place.

Why would the Russian government need to interfere anyway? Because unless Lee Camp makes the brave/suicidal move of offering focused criticism on Russian foreign policy, for example, there's nothing they need to stop. The criticism of the constant failings of US and European governments, their corruption and the collusion with big business is being constantly highlighted.

However, why wouldn't this knowledge worry the Russian government? Because with this knowledge an aware citizen would see the failings in their own country, or would become determined to become an activist for progressive change and stand-up against authoritarian leadership... except, that's not what is happening anywhere and this is why Russia is fine with this.

For one, it's only criticising the 'enemy' and although the same criticism could easily be leveled at Putin and his government, it isn't, and for a passive viewer you are left with the feeling that they (Russia) are doing nothing wrong. A feeling that would be increased if one read the biased RT news. The criticism itself is very 'light'. In a 25-30 minute programme, Redacted Tonight covers only a few stories and in a very shallow manner. There isn't a great deal of information, no other sources are cited, and the viewer isn't directed to other avenues where they could learn more themselves (a reading list if you like). This is the problem with the John-Stewart era of entertainment news, especially for the Left, because although there are many John-Stewart-esque shows and comedians now (Colbert, Oliver, Noah, Bee) they're having a relatively soft impact upon people's general opinion. Why? Because people treat this as entertainment primarily, they don't see it as 'real' and therefore aren't compelled into activity.

I'd continue with this line and suggest that the only strong criticism given out in this manner, the Nightly Show show with Larry Wilmore, was cancelled. You could highlight many possible reasons for the programme being cancelled, but I would suggest the most influential reason was the perceived 'didactic' tone of Wilmore, basically, he highlighted specific cultural problems in America and didn't pull any punches. The 'negativity' of this approach was simply too much for an audience that was expecting some light laughs at the Republicans, but when it's pointed out that 'soft liberals' are just as much too blame for the inherent racism and other problems in the country... it's turn off time. I think that's what the Comedy Central CEO meant by "not resonating."

To conclude, Lee Camp might be truthful with his criticism and correct with his choice of targets, but he needs to decide whether he's a comedian or an activist and writer. Political information delivered as entertainment fails to show itself up for proper discussion or rational critique. It's just given as a 'point of view' and this is the death of rational debate. Example: Saying that the Holocaust didn't happen, isn't just an 'opinion' and shouldn't be allowed to be presented as such. Now, I'm not saying that the people at Redacted Tonight are saying anything so revolting, but saying something and getting whoops and cheers and laughs doesn't make it correct (even if I basically agree with the criticism). It's a very basic short-hand, it's another example of an echo-chamber, it isn't showing why it is correct (assuming that it is). Jokes aren't an argument. These programmes mollify an audience, they don't inspire activism, they stop it. This is why Russia and other governments like the John-Stewart-esque approach.

His style of yelled dismay (much like Cenk Ungar, but with jokes) is also a tad wearing and needs toning down. Just because you're shouting doesn't make it true (cf. an academic told me once that the principal failing of first year argumentation is confusing italics for making an actual point in the argument). Much like a parent of a toddler prone to tantrums must feel, eventually you stop listening...

Also, stop scowling in your publicity photos. You're not a hard-hitting journalist. You're a comedian. 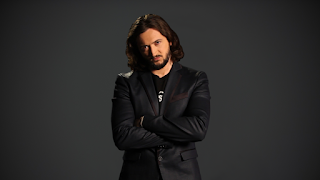 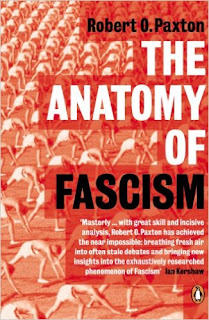 This is certainly a pertinent and timely question to be asking, especially when the phase is 'slung' around so easily on various internet forums, news reports etc.

For many it's use is only as a slur, although one would hope they had some idea of it's origin. In this sense it represents any dictatorial group and is conflated with 'Nazi'. The over-use of this word, especially when misapplied, reduces the word to shock comedy (as in, grammar-nazi). Used most regularly in millennial meme culture, which is a style so bored with its own irony that it ceases to be merely ironic and is instead is something like complicity with consumerist authority. "It's only a meme bro."

I was talking with JJ recently and trying to argue that the right-wing are the only group that can be defined as Fascists. This is obviously incorrect, as was pointed out to me, but it was correct from a purely origin basis. That is, Fascism originated as a right-wing conservative reaction against liberalism and the threat of Marxist sociology. However, I'm starting to think that the old left-right distinction that so determined the 20th century, is no longer of any specific relevance. There is a shift happening in politics along different lines, a reaction to the globalist reach of the conservative neo-liberalism of Thatcher and Reagan. That this reaction is a populist nationalism that is xenophobic and exclusionist isn't a great surprise, but is it a new form of Fascism?

So, let's look at Historian Robert O. Paxton's own definition (below). I can't help but see similarities with various groups and governments currently in the public sphere. Certainly Trump's own MAGA ideology seems to fulfill 7/9, possibly all of them, depending how much further they are allowed to continue (Bannon and the extreme Christian right in American would definitely fulfill all nine if they got their way). Also, Daesh fulfill all nine of Paxton's criteria for Fascism, which is no surprise, as any Theocracy certainly carries an overwhelming thread of Fascism with it. The Brexiteer led fear in the UK, possibly only currently fulfills 4/9, but who knows what the future holds? Norsefire?