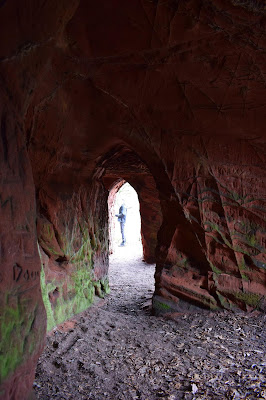 My name's CFT Godfree-Morrell, but you can call me Chris or god-free morals, if you prefer to use blogger aliases.

Long ago I was a PhD student, but academia (and money) was getting me down. However, it was the basis of this blog and I still find myself thinking about all those books of philosophy I didn't write, so there might still be some thoughts about that.

Some time ago I finished a CILIP accredited postgraduate qualification in librarianship and am now working as a professional librarian, although nobody ever calls it that anymore (sadly).

It's fair to say that I don't like one topic blogs (or people) and this blog will therefore represent my interests, perhaps sometimes focusing mainly on literature, sometimes film or the visual arts, but always with philosophy somewhere thereabouts.

So, this is generally; a book blog with art reviews, film, television, and theatre discussions, some music videos, divisive politics, incoherent philosophy, and general ramblings. Pretty much all the things I like and like talking about.

Currently I've developed a sort of regular daily schedule that I'm trying to keep to on the blog, mainly because I find that I can work a little more productively if I give myself a routine. I suppose we are all creatures of habit after all. However, because I also enjoy breaking up established order and get bored by endless repetition, I might suddenly change daily events, ignore them, add new things, or continue old series (love is the law or tales from academia f.e.).

If it isn't obvious I don't ever publish that regularly, but this is still my schedule and I intend to keep to the days and their themes. I wrote this post in 2017 to detail the current focus of my blog and my general outlook, and although I'm not getting as much time to work on my novel/story-collection/rpg as I'd like there's still that going. So, Deep Darkness & Splendour occasionally abounds...


At the moment my current schedule is: