In yesterday's post I wrote about people being happily compliant with the orthodoxy of the state being applied to their existence, the mediated way in which they are allowed to be. I wrote about this, in the first instance, with a reaction akin to horror. We have pulled back the curtain and haven't found a singular big Other in charge of the controls, but instead countless shifting forces competing over who gets to push the levers slightly in their favour for now. No one intention driving these choices, but rather a shifting 'cockroach' mass pushing us towards... Towards what?

In my horrified mind it is something like a loss of personal rationality; the distinct singular voice, talking not amidst a cacophony, but as a participant in a fair and truthful dialogue with many others.

Here's my 'what if' then. What if, my view isn't the one we should be fighting for? What if, the course of humanity is already driving us towards "deselfing."

Here's an idea... Maybe it's okay to no longer want to be an individual.

And maybe... Feeling unique is no indication of being unique...

... yet it is the feeling of uniqueness that convinces us we have souls.

Individualism may, in fact, be a form of brain mutation not evenly spread throughout the population.

Many people are happy to belong to a group - any kind of group - and someone who isn't is a threat.

The Age of Earthquakes, by Basar, Coupland and Obrist. 2015 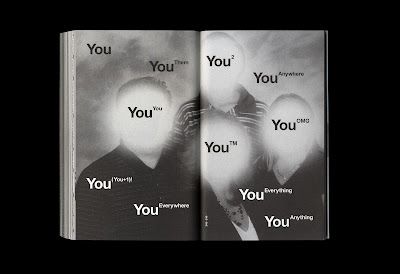 In the 'Age of Earthquakes' the authors describe deselfing as, "[w]illingly diluting one's sense of self and ego by plastering the Internet with as much information as possible."

You cannot die if you aren't an individual, aren't a person, are just a chemical response that is part of a larger amorphous other, part of an ongoing algorithm.

Perhaps not. I do not think so at least, but then perhaps that's just a result of my 20th century mind. My reliance on the written rather than the spoken.

However, we aren't there yet, and the more people let 'authority' make choices for them, the more they are made tools for others, they willingly participate in their own exploitation... but what if they're okay with that? Do we, as 'rational' minded persons, disbelieve them. How do we know that our perspective is the correct one?

Perhaps we might comfort ourselves with a saying from Bertie, "the whole problem with the world is that fools and fanatics are always so certain of themselves, and wiser people are so full of doubts."

We think then that moderation, that good old Centrism, and the status quo are not to be feared. Why break a system, before it is broken? We must make the best of what we already have.

Perhaps the farmer has the best of intentions for us turkeys. Besides isn't Christmas all about peace?

We are today under the tremendous pressure of what we should call 'enemy propaganda'. Let me quote Alain Badiou: "The goal of all enemy propaganda is not to annihilate an existing force (this function is generally left to police forces), but rather to annihilate an unnoticed possibility of the situation." In other words, they are trying to kill hope: the message of this propaganda is a resigned conviction that the world we live in, even if it is not the best of all possible worlds, is the least bad one, so that any radical change can only make it worse.

In defence of the indefensible: Cambridge Analytica and the Status Quo 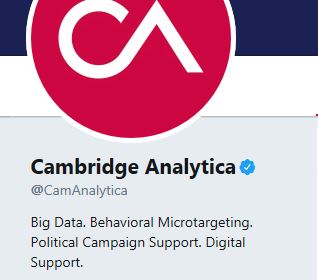 It's interesting to see some people defend Facebook and Cambridge Analytica.

They say things like, "I know what I'm giving and what I'm getting, I'm happy with it." & "Misusing data you have legally is not data breach." & "All the top advertising agencies also download Facebook data..."

Let's go over these arguments & intuitions, describe where they might be coming from and what they might represent.

My initial reaction to the exposé of Cambridge Analytica advocating certain 'underhand' (i.e. illegal) tactics in their method of corporate and public manipulation was relief.

Relief that I wasn't going mad with paranoia, that the various academics and reporters who have been describing these very tactics by companies like Cambridge Analytica were not false, or exaggerated, or otherwise wrong.

Secondly, I thought of how this massive public 'data breach' would be received and I felt hopeful that the outcry would be such that people would look again at how they are using social media and how it was using them.

Then I felt the cynical wave of, "what else did you expect?" Of course, these companies, these politicians, were always corrupt, were always working in co-operation to collectively mislead, misdirect, and control. "Why bother? Nothing will change, it's just the way things are."

So, here's where we are now.

There are those that steadfastly stick to their political lines, by supporting their team, because they've taken this as a direct attack on their boys because they happen to be the one's named; that is, Trump, UKIP, Leave Campaign, etc. Their defense is to retort, "why blame Trump (et al) when Hillary, Obama (and so on) are doing the same thing." This is already a popular tactic in 'debates' on Social Media, to simply shift blame or distract the initial complaint with accusations of their own, i.e. "we're not Nazis, you're the Nazis for calling us Nazis, Nazi!" This makes the initial complainant then have to defend their position, rather than the initial point, that is, it is made personal/emotional and is therefore deflected. Now, whether those who employ this tactic are simply 'team supporting' and are therefore missing the broader point, which is, it doesn't matter who is doing this, but that there is high-level support of voter manipulation and corruption underway across the so-called democratic 'Western' powers and that they are getting away with doing it. This should be an issue that is beyond party politics and should unite those of use who purport to speak for freedom and other apparent democratic virtues.

Then there are those who take this as a definitional problem. It's not data breach, it's not a theft on me because it was legally acquired, they didn't hack into computers, the companies gave up the data, it was just that it was 'misused' which is an ethical choice rather than legal choice. Basically, the problem here is not the ethical conundrum, but that people are misusing the word 'breach' that's the real problem! Words mean nothing anymore and we can't even have this debate until people are clear about whether it was a breach or not. What exactly is the legal definition of moral culpability? And so forth. Indeed, this is very close to the defense of the rich and famous (and every global corporation) who 'hide' their finances in offshore accounts so as to avoid paying taxes. "Well," they say, "it's not illegal illegal is it? I mean. it's certainly bad ethically, but they haven't done anything wrong by law have they? And anyway, if YOU had that money you'd DO IT TOO!"

Next, we've got those that say, "I've got nothing to hide, so why should I worry?" That is, I only share a certain amount of data, I'm careful with what I post and say online, it doesn't effect me directly, so I'm probably alright. There are plenty of problems with this attitude, as I've expressed before, but briefly the error is that it's not actually up to you whether what you do and say is 'of interest' or not, but as usual if you're in the majority group(s) there's probably less chance that you'll be targeted, let's just hope that things don't change then and that you suddenly find that your views are now 'outside' or such like...

Finally, as I see it, we've got I'm okay with it. "I know the circumstances, I was always-already aware of the possibility of data loss, there's nothing I've shared that I'm worried about, I'd signed up willingly and it doesn't effect me." So, similar to the last one, but more blatant. It, like all of these positions, are different levels of endorsement of the status quo, of not wanting to 'rock the boat' on the chance that something bad might happen to me or my group(s) of interest.

If you already find yourself labelled a radical, or an outsider, there's certainly less for you to lose, or so it might seem, but even the everyday 'allies' of these groups are participating in this rejectionist behaviour. The retreat to "that's just how it is."

There is something more endemic going on here, it seems to me, the fear to break the control of our masters, because that's how it's always been. Even if, these structures aren't ancient and long-lasting as they are presented, but that they are instead constantly being developed and reacting to changes in society. (A society that they seek to control and mollify.) The first step would be to stop participating in their propaganda for them.

However, if you've never known of a different way of thinking, if the only way is Capitalism, then this is just how it has to be. It might not be the best of all possible worlds, but it certainly isn't the worse either. That is the lie, to help us sleep on. "Worry not, keep shopping, keep participating, because what's the alternative?" If every possible change to the status quo is portrayed as potentially violently destructive and damaging, who in their right mind would sign up for it? Sure, it's bad now, but kicking back will only make this worse, all we have to do is 'grow up' and deal it with it in the way that we've been taught to.

And even if you are still thinking that this is wrong and that there must be a better way, you can't name it can you? You cannot show how it would immediately work to totally replace our current system with complete success, CAN YOU? So, therefore, why even try?

So, where do we start, can we break this cycle, do we really want to?
Posted by god-free morals at 12:00