It's that time of year again for hearty and (mostly) healthy foods.

Here's another of my attempts at making a winter salad using some of my favourite ingredients.

But, Apple&Bacon&Feta&Kale&Quinoa&SweetPotato SALAD seemed a bit of a mouthful...

It's probably NOT the most healthy salad; with fried bacon, onions, feta cheese, and roast sweet potatoes, but it is tasty! And is almost certainly healthier than another frozen pizza and chips! (note: almost certainty is not a legally binding guarantee). If you're concerned, focus on the apple, kale and quinoa. They're really good for you! 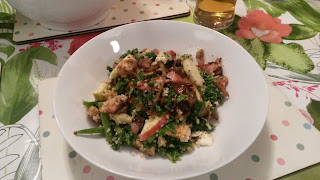 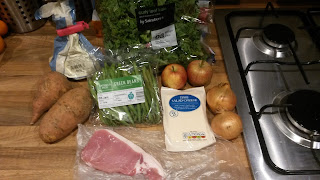 Method: (it's worth saying that you don't have to try and do everything at the same time, indeed, without help it might be a bit much. Instead, work through a couple of ingredients at a time, it isn't a HOT hot salad, but only needs to be 'warm-ish')

2. Prepare the Kale by removing the thick stalks and tearing/chopping into smaller pieces, set aside in a colander and lightly salt. Leave to rest while you prepare the other ingredients.

3. Leave the apple chopping until the very end or it'll brown, otherwise chop up everything else. Put the cubed sweet potato on a roasting tray and lightly toss in olive oil. They need at least 30 minutes in the oven, but a bit more wouldn't hurt. Depending how crispy you like them.

4. Wash the quinoa in cold water, drain, then in a pan cover with double the amount of cold water and bring to the boil with a lid on. Put the heat down very low and leave to simmer for 10 minutes or so. When the water's almost gone turn off the heat and let it sit to absorb the last of the water.

5. In a frying pan, fry the onions with a little oil on a high heat for 5 minutes or until browning, then add the bacon and lower the heat, stirring occasionally while you do everything else! Cook for at least another 15 minutes or until everything is nice and crispy (this can be quicker depending on how you're scheduling this recipe). For extra sweetness a small drizzle of Golden Syrup or even Maple Syrup is very nice (I had golden).

6. Bring a large pan of water to the boil, add the kale and green beans, then when it returns to a boil, lower to a gentle simmer and give it 6 minutes.

7. Make the dressing by combining all the ingredients in a small bowl and stirring. I would have liked some fresh coriander leaves but just had dried.

8. At this point you're probably ready to start combining all your ingredients in a big salad bowl. Leave the onions/bacon until last, as a topping. Combine everything, stir, add the dressing, stir again, then add your bacon and onion topping. Season with plenty of ground black pepper. Ready to serve! 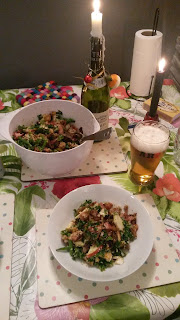 Vegetarian.
Obviously just omitting or replacing the bacon with a veggie alternative is possible, but I think that some cooked chestnuts might also make a good tasty seasonal alternative.

More herbs.
I was a little fresh herb light, this being winter, but a good handful of parsley and maybe some mint would make a great addition.