INTRODUCTION
The Elf is the species that has come to depict what fantasy (certainly post-Tolkien 20th century fantasy) represents in the popular imagination. You might consider more monstrous but intelligent species as more representative of fantasy, but I would argue that this is an older fairy-tale depiction of the genre (dragons and goblins). That, instead, the angelic meta-human elf has come to represent all the various dreams and hopes of various fantasy writers and creators from Tolkien onwards. Indeed, that in contemporary fiction the elf is likely to be removed (such as in GOT) in an attempt at 'realism' or 'grittiness' shows the impact these creatures have had in the genre. Throughout the development of 20th century fantasy the figure of the elf has constantly been developed, subverted or ignored, but has always represented what is perfect or admirable by us. Something that in itself is often shown as impossible or actually undesirable (f.e. the Vulcan's lack of emotions depicted as a flaw and yes, Vulcan's are elves).
The Elves then are depicted as tall slim good-looking white people with pointy ears. Occasionally, they are white people with purple or jet black skin and white hair. They are feminine and perfect, beloved by many and detested by others. Frankly, I'm sick of the super-model saviours of the fantasy world. Time for something more otherworldly. If elves are an ancient long-lived race, why are they so often the willing stooges of imperial humans in fantasy? That's not too smart.
My dislike of European cultural stereotypes in fantasy fiction hopefully does not lead to my introducing equally woeful Native American stereotypes or something similar, something that I've observed in a great deal of 90s RPG settings. I'd like a species that was sufficiently 'other' and not merely a pastiche of a historical culture (from a romanticised viewpoint, i.e. simplified).
The elf in my world is an attempt to get past this Tolkien created narrative and bring back the elf as a more sinister fairy-like being, which is in itself not original. However, I do not wish to simply introduce a species of Western folk tale fairies (Sidhe) into a supposedly non-specific and alien setting. Thus, this is merely a starting point for their description, that point being 'other-worldly oddness' and inherent danger.

PHYSICAL CHARACTERISTICS, in order of newest to oldest;
Exoskeleton with a 'human' shape
They are considered attractive and they have pointed 'ears'
Part evil fae, 'the gentleman with thistledown hair'
Part praying mantis
Part cat (chesire)
Part china doll
Part Manga 'big eyes' (cephalopod 'universe eyes')
Hard 'porcelain' or 'ceramic' skin/exoskeleton
Their 'carapace' (exoskeleton) is intially translucent, allowing them to 'glow', but thickens and colours as they age.
They have an insectoid evolution.
Height ranges between five and seven foot tall (1.5 to 2.1 metres) with the average on the slower scale, typically under 5' 6" (1.67m).
Their 'skin' colouration is typically a pale yellowish like ancient porcelain, complete with irregular mottled multi-coloured blotches, most of which are too small to be seen, i.e. minute freckles of odd colours.
The huge mop of fluffy 'hair' of the elf is in various bright colours such as; candy floss pink, electric blue, neon green etc.
Their eyes are large and black without visible iris or pupil. Two sets of eyelids to protect them.
Large wide mouths with small sharp needle-like teeth and long pointed tongues.
The elvish physique, slender and curving, whether male or female leads to humans uncousciously refereing to elves as 'her'. Likewise dwarves are 'him' and orcs and goblins 'it'.
They are incredibly strong considering their small frames.
Although there are two sexes there is less male/female difference than humans, leading to a certain adrogyny but there are some size and weight differences unlike, for example, the dwarves.
Elven blood is blue and this has been theorised as being due to their closeness to magickal forces. The reason is, in truth, much more straight-forward, but highlights the view that most humans have of elves as being akin to magickal beings and almost semi-divine in nature.
Elves are physically seemingly quite fragile, they have scrawny spindly limbs that are made to look even smaller by their large heads, long fingered hands, and (commonly) a large unruly mop of wild hair.
All elves have exceptionally large almond-shaped golden eyes similar to a feline (complete with a third eyelid) that shimmer slightly and glow gently in low-light or fiercely when using magick. They have very small fine noses, with long thin nasal bridges and small slightly upturned stubby nose 'tips'. Elves have quite wide mouths for their size, but very thin lips and small teeth (similar to human children), their tongues are, however, especially long and pointed. Their most famous feature however is certainly their pointed ears, which are both very long and large, their ears typically point upwardsjust passing above the top of the head, they are also partially movable and able to point towards a sound source.

SPECIES DESCRIPTION, as before newest to oldest;
They have long-life, actually connected unconcious, but are not immortal and certainly not angelic.
They are, or can be; Cruel, Death-obsessed, Suicidal, Hollow, Petulant, and Morose...
The elf's metaphorical origins story: In the post-apocalypse (how they think of this world) there are those that remember the before, and those born after who simply accept the world as it is and don't feel any loss for what they have... lost. The elf then thinks of themsleves as those that know the before and this causes them stress.
Elves have a connection between each other, not as direct or definite as a Borg hive mind, but something more than a mere abstracted collective unconscious or a world-soul.
Heightened sensitivity to the vibrations of magick, to the connections between sapient lives.
The soulfulness of the elf as a damaging connection that needs to be managed by solitude and natural balance, or else, the elf falls into a resentful negativity with violent outbursts of self-destructive anger.
Power is a weakness, the harder they push back the worse they are broken. Only calm reflective acceptance and balance is the answer to the constant feedback they feel.
Elves and Orcs, perhaps because of their 'histories of violence' have the possibility to become steadfast friends (as individuals/characters, as pecies everyone remains reasonably neutral, although their is some distrust everywhere) but they also have the possiblity of forming dreadfully hate fueled vendettas.
Their anger (extreme aggression and depression) is a genetic disease also called the 'weight of ages' and it is a primitive instictual self desctruction in the face of ultimate horror. This contrasts with the righteous orcish arrogance of their prideful rages.
Elves value aesthetic perfection above all else. This and other factors makes the elves rather detached from 'normal' society and interactions. An elf might react with great joy to some ancient carving or obscure object, but yet seem utterly unmoved by something otherwise hideous or tragic. Elves do not value friendship in the same way that other species do, although they are very loyal to their own people and those they have come to trust, they seem somewhat cold and aloof in their dealings with others, but this is just another manner in which the elf attempts both to attain aesthetic purity (a key concept for elves) and to atone for the past sins of the elven people.
As such a long-lived species (most elves live at least 1000 years) an elf is never in a hurry to act or make a judgement, they prefer to consider things at length. However, this does not stop elves from violent or rash actions, indeed, they are an aggressive people prone to seemingly meaningless cruelty.
Part of their origin myth is that the elves were once servants of the “Vile Mysteries”, the chosen ones whom these dark powers formed in their image to please and serve them. Some elves came to see the actions of their masters and creators as wrong and in a great war, broke the power of the Vile Mysteries, overthrew them and freed the other species from their control. Such rebellion came at a price however and the once great elven people were now cursed and thrown out of their former paradise. Abandoned into a cold and empty world, the once mighty people are now struggling with the guilt of their past and their apathy towards the future. There are still rumours that their more powerful uncursed brethren (the “High Elves”) are elsewhere hidden in mighty fortresses and biding their time for the return of the Vile Mysteries. (Note: Whatever truth lies in the myth has been obscured by elven ego and their desire for martyrdom).
PSYCHOLOGICAL KEY
Highest: Calm
Component: Nature (connected)
Lowest: Overwhelming sadness
Elements: Solitary, reflective, sharp 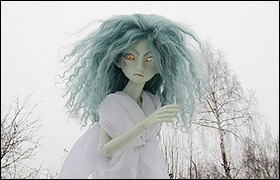 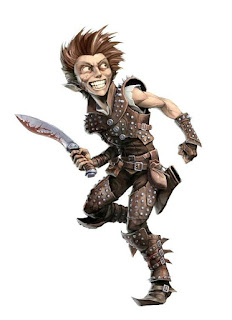 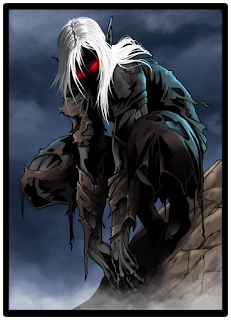 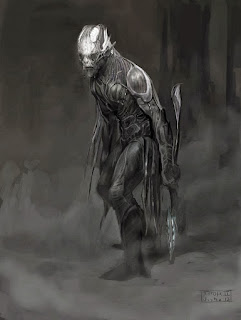 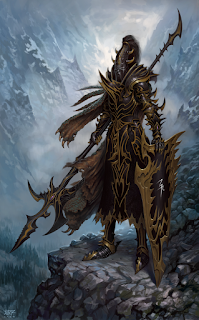 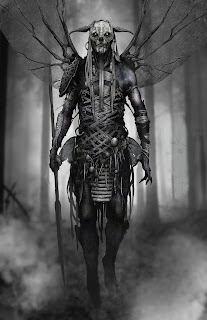